Growing up, the notion of ever cuddling a cat felt as impossible and far away as the notion of my traveling to the moon (in fact, probably cat cuddling was less likely to happen).

I had severe cat allergies for all my childhood. Just being in a home where there was a cat, even if I never petted it, and if the house was very clean and kept-up, within minutes my reactions would start: sneezing fits where I’d sneeze 30 times in a row, eyes relentlessly itchy and watering to the point of swelling up so I could barely see, face swollen and blotchy. I would get to the point I couldn’t function and would have to leave anywhere with a cat. It would often take ages to recover: long showers, laying on a couch with a cool damp washcloth over my eyes, and medications that never seemed to make much of a difference. It became something my family and I had to work around: I couldn’t really go inside the homes of friends with cats, my family couldn’t stay with other family who had cats.

But in my late teens, it started to change. I noticed if I was in a house with a cat I seemed to be mostly ok — though I was still too afraid to pet one. For years after this change, I thought it was because I had gone vegan. You see, I’d read suggestion that there may be some correlation between consuming dairy (being inflammatory and mucous-producing) and the exacerbation of allergies.

A few years after, I came across the Divine Truth teachings, wherein Jesus and Mary discuss how suppressed emotions in the human soul are the cause of physical problems in our bodies. While the notion of a connection between emotions and the body wasn’t entirely new to me at the time, I had more thought of emotions as a possible player in physical issues, but wasn’t really sure about the idea they could be the entire cause — including the entire cause of allergies — until I came across the following video below. In this video, Jesus shares a personal story about how he also was allergic to cats, and he discovered the root of this being the fact that his father hated cats, and he felt he wouldn’t be loved by his father if he loved cats, and that going through this emotion cleared his cat allergy:

It was then I started reflecting on this turn in my life from years before, differently. You see, it was the exact same time that I went vegan, that I was also opening up to some of my emotions for the first time in years, and facing truth about my family for the first time ever.

At that time in my late teens, my family had fallen apart in my parents’ divorce, and my father had taken some extreme, abusive, hurtful actions in the process. Truth about him was coming out left and right, which was a shock for me as my Mom previously had hidden things he did from me and I fully believed the family facade that he was an awesome dad and great guy. I was in a sort of state of shock that preceeded emotions finally flowing. I was in therapy for the first time, something my mom had set up to support my brothers and I through the divorce. I had an amazing therapist who I still credit with starting the beginning of some big healing for me, who was incredibly compassionate and did not shy away from facing how parents can really be towards their children. He helped me to start to see that I actually had a very abusive father who was treating me terribly, and who in fact always had. He helped me understand what my dad was doing was far from normal, and he helped me understand and validate feelings that nobody ever had before.

All my illusions about my dad were crashing around me, and the intense pressure of so much truth coming out all at once, plus the permission the therapist gave me to voice and consider my feelings, led to some rage and fear and grief coming out of me, after not having cried for so many years. For the first time ever, I started recognizing my father’s oppression and treatment of me, my terror of him, and my sadness at not being loved by him. This kicked off a few years of heavily focusing on “dad stuff”.

And my dad hated cats. Growing up he’d talk about how useless they were, how stupid people who liked them were, and how dogs were much better (we had a dog, and I wasn’t allergic to dogs). When a cat died for whatever reason, he felt it was a good thing. He thought they were pointless animals and the world would be better off without them. I always had to pretend to agree with him, or I’d get the rage, judgment and condescension that happened if I ever had a different opinion or preference about
something than my dad.

If I had loved cats, my dad would have projected that I was stupid and ridiculous, even to the point of feeling hate and rage towards me. There was so much terror of him, and I felt so much shame about loving things he didn’t love, that I even convinced myself for years that I didn’t like cats either, even though deep down I wanted to play with them just like I loved playing with every kind of animal, and despite feeling sadness when I saw someone having a moment with a cat. Perhaps unsurprisingly, my favorite stuffed animal as a child — and I had a LOT of stuffed animals — was a very realistic-looking cat.

Though I’d noticed that my cat allergy had changed over the few years in my late teens, I was still too scared to actually touch a cat, for fear there was still a mild allergy there that might flare up. But also, I realized recently that somehow the law of attraction has been such that I have very rarely ever been in environments with any cats for years.

But a month ago, an opportunity to cat-sit and house-sit was presented to me. I was scared… What if it flared up again? What if living with a cat full time brought it out? Would I still not be able to touch cats?

But guess what? NOTHING HAPPENED.

Every day I’ve been with the cat in the pictures below, which has been for almost a month now, I’ve had no allergy to her at all. I have been incredulous every day, thinking back on how my cat allergy would render me bed-ridden every time I simply shared air in a house with a cat, and yet now I can pet this cat, I can touch my face and eyes after, I can bury my face in her furry back, something that would have been apocalyptic in my childhood. Now, it’s the same as it’s always been with dogs for me, which is to say, absolutely nothing happens. 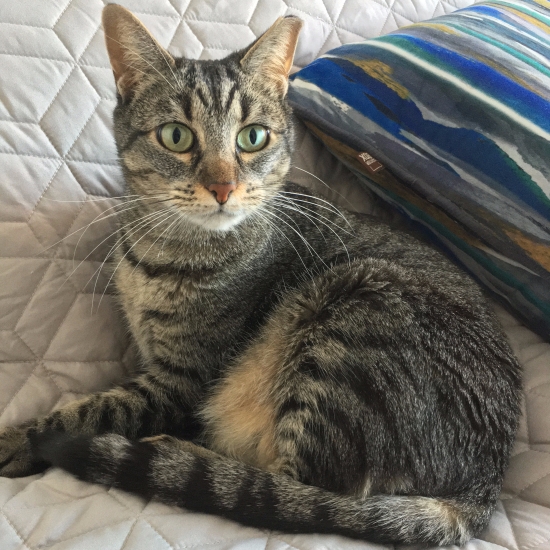 I now believe that, while I feel going vegan probably helped, as I do think inflammatory and mucous-producing foods make allergies worse, this was not the cause of my allergy in the first place, nor were dietary changes the reason it healed. I feel the allergy was created in my soul similarly to what Jesus described: if I loved cats, my dad wouldn’t love me. And while I wasn’t thinking about cats or my allergies at all when I was in that phase in my late teens, I was heavily focusing on my feelings about my dad, often raging, often sobbing and feeling some grief about my relationship with him. So I now feel that what healed my allergy to cats was seeking truth about my dad’s oppression, and his demand for me to agree with all of his opinions and beliefs, including about cats, and feeling some of the suppressed terror I had about the threat of his rage and disapproval, and my sadness at his harshness and lack of love, that healed my allergy to cats.

(That all being said, this isn’t to say I’ve healed all those feelings about my dad — I definitely still have a lot of all of those feelings above that I’ve yet to feel though — but I suppose I’ve felt enough at least to heal my cat allergy).

If you have any allergies to animals, please check out the Divine Truth material and feel about what the causes in your family might be!

I wanted to clarify as well, that my understanding also is that the human desire for pets and relationships with animals is often addictive and about avoiding emotions. So my emotions towards cats (and dogs and other animals) may not be pure from God’s Perspective, and I don’t want to present that they are the right feelings to have. I just wanted to share a story about the truth about animal allergies, and how they can heal, after such a crazy experience that I’ve had.

Also, it could be another blog post entirely, but if you have hay fever and allergies to pollen and plants, there is also emotional correlation for them. I also had hay fever, and once as a child got a plant-allergy scratch test where my back lit up like a fireworks show. The “joke” in my family was that “Courtney is allergic to life”, because it wasn’t just cats I was allergic to, it was also horses and trees and grass and pollen. My hay fever was so bad that I didn’t breathe through my nose for probably the first 13 years of my life because I was always stuffed up, even in my house where there were no cats. Even sleeping at night I’d have to breathe through my mouth.

My understanding from Divine Truth now, is that hay fever is about suppressing the grief about feeling oppressed. For me, I feel this kind of oppression came equally from both my mom and my dad. The hay fever has changed a lot, and I am glad to say it no longer is a constant as it was in my whole childhood, though it does flare up every once in a while. When it does, I’ve noticed there’s typically a correlation to someone I’m spending time with, that I actually feel oppressed by, and am not allowing myself to feel about that oppression. So please look into Divine Truth if you have any kinds of allergies, whether to animals, plants, whatever!

Here are some videos in addition to the above video I’d linked, for you to check out:

Bye for now from a now-feline-enthusiast, 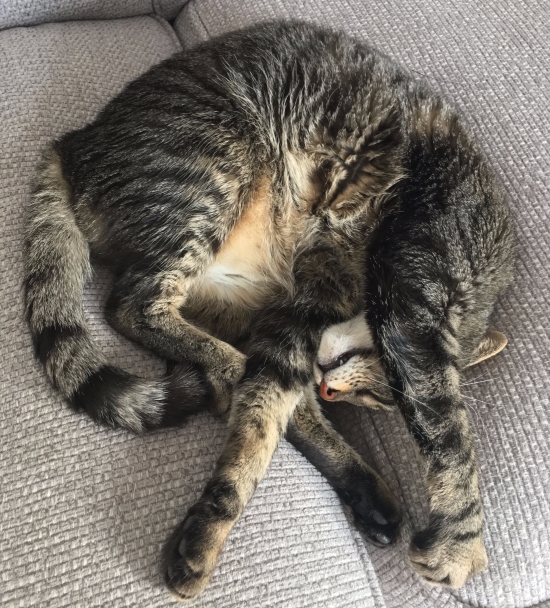